A Practical Alternative To The EB5 Program For Investors To Immigrate To The U.S.A. 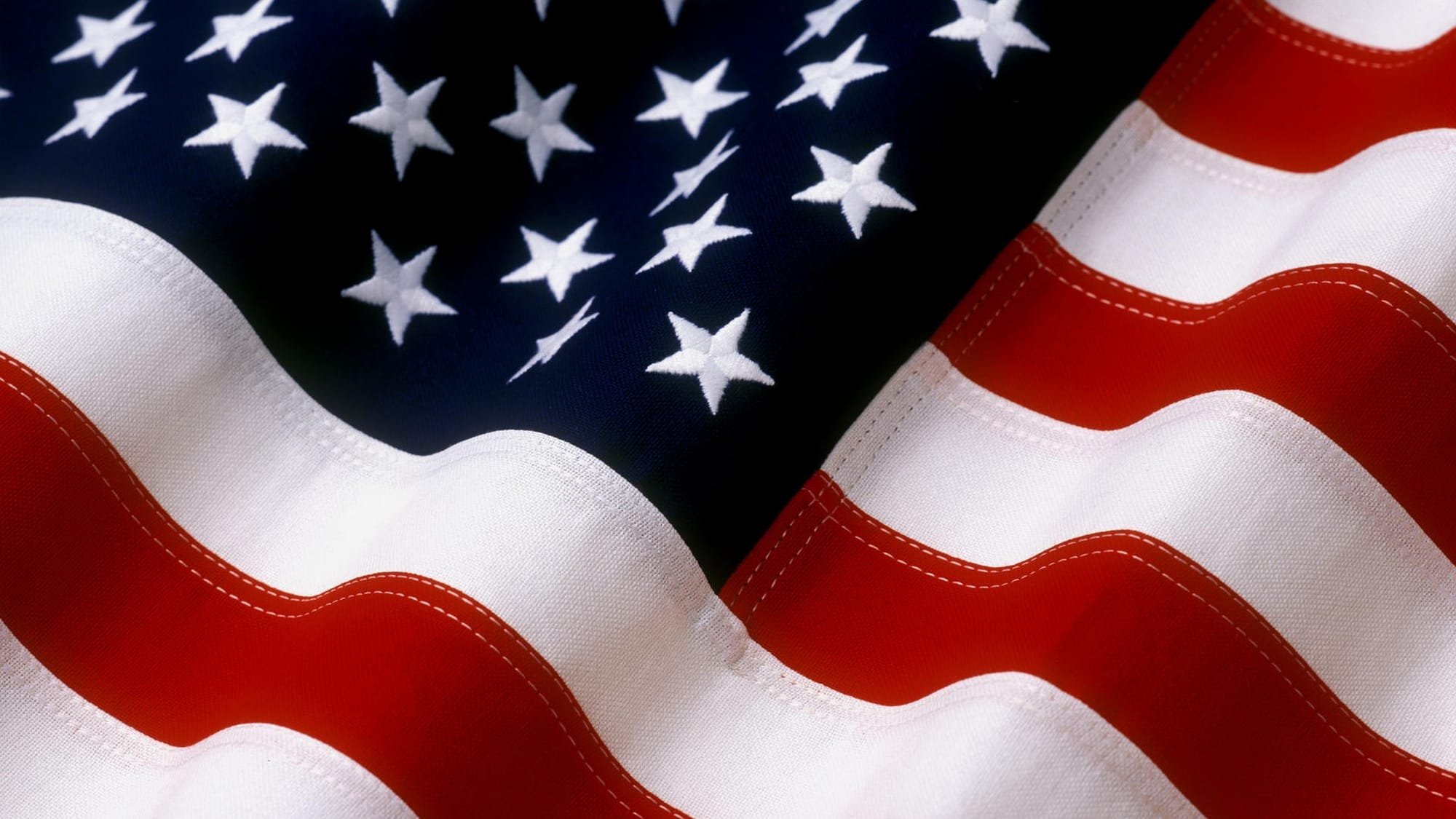 For some time now potential EB5 immigrant investors have been awaiting new minimum investment requirements from the U.S. government. There is little doubt there will be an increase from the $500,000 for regional centers and the $ 1 million for direct investment currently required under the EB5 program. But what will the new minimums be? There is a fear in the EB5 community that if the amounts are set too high it may become difficult to attract new investors to the program. Since there are both U.S. and other country alternatives to the EB5 program, the choice of the minimum required investment is an important one. In this article I want to  illustrate an alternative to the EB5 program that can be employed by any foreign investor to avoid paying any higher amounts when they are set under the EB5 program yet still immigrate to the United States. To make the subject more interesting, let's look at a Chinese investor since in that instance we can also show how such a person could also address the concern about the immigration backlog that Chinese investors currently face and others may come to face under the EB5 scenario.

Suppose, therefore, you are a Chinese investor who wants to move his family to the United States and are looking at the EB-5 investor program. As already mentioned, a Chinese backlog has formed and it can take as long as 10 years before such an investor will be able to move to America. Suppose, given that fact, the investor is looking for alternative U.S. investor immigration options that involve two important elements: 1) that the investor and his family all get green cards and permanent residence in the United States as soon as possible, and 2) that at the very least, at the end of the required investment period, the investor gets all of his invested money back as safely as possible. This is normally the case. Suppose further, for the sake of making this example as concrete as possible, the investor currently owns and operates a hotel employing say, 100 people. Suppose finally, that the investor is not keen on moving to the U.S. on a nonimmigrant temporary status, such as in L-1 status, but wishes only to move if the family gets a green card. What is the best option for such an investor?

The answer is the EB-1C inter-corporate green card option. Note that this option will usually require the investor to be reasonably well established abroad in his business and may not work for smaller businesses, thus the hotel example. Note further that the investor needs to employ a careful immigration strategy.

First, the investor needs to be able to show he has worked for his foreign company in a managerial capacity for at least one out of the last three years. Further, the investor will need to buy a similar business to the foreign one eventually to move to and run that business in the United States. In the case of a hotel owner, a good option would be to buy a hotel under a franchise arrangement since there is more management support offered in that scenario. Options could include a purchase of say, a Best Western, Renaissance or Holiday Inn hotel. Finally, the investor on arrival will need to step into a senior management role in the new company, such as a Chairman of the Board of Directors for example, where he can supervise what is taking place in the company. To accomplish this task, if the foreign investor does not currently speak English, he will need to learn at least some basic English by the time of his arrival.

Since the investor wishes to wait until he can qualify for a green card for the family, the purchased hotel would need to be managed for a time period by a U.S.-based management support team that could step into that role. There are firms that can help in that regard but of course they will likely charge a fee, although a fee likely lower than the fees in the EB5 scenario. To qualify to apply for the green card, the investor would need to own at least 50 percent of the U.S. business for at least one year. The processing time for approval and arrival to the USA would also take about another year. So from the time of purchase, it would be two years before the foreign investor can arrive in the USA with his family. In addition, it is likely that the investor may want to maintain the support of the American management team for some time until he can get the hang of how things work in the U.S. Thus in this illustration I make the assumption of up to five years in total, before the investor obtains either the return of his investment when he sells his hotel or the transfer of the full management of the hotel’s operations into his own hands with the departure of the management support team. This period of time should be sufficient to enable the investor to adapt to an American way of life and if need be, improve his English sufficiently to manage on his own completely from that time on.

Details of this EB-1C scenario by way of a comparison with the EB5 program are provided in the following chart. Note the chart assumes an increase in the minimum investment that will be required of the investors in the EB5 program, assuming it will be the minimum of $ 800,000 in regional centers and $ 1 million for direct investors as some commentators have speculated. As already mentioned, increases such as these are fully expected by the investment community at any time soon. Note also that while a EB-1C applicant does not have to invest a specific required amount to qualify, the amount should make sense from a business standpoint. It could be anywhere from say $ 100,000 U.S. for small start ups to $ 500,000 U.S. or more. We are working with the $500,000 figure to be comfortable. Now here is the summary comparison: 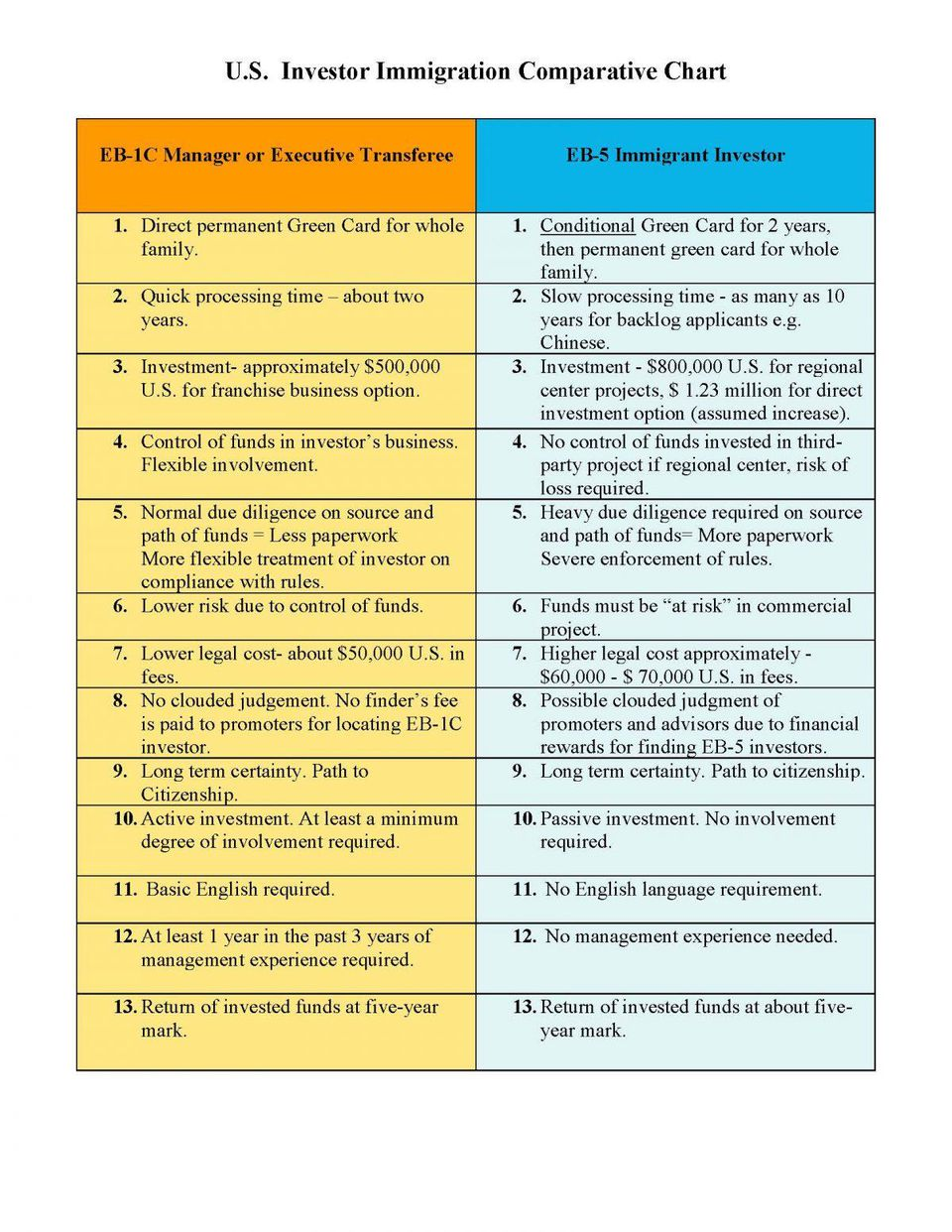 From this analysis it should be clear that the EB-1C green card is an excellent alternative that investors can employ to immigrate to the United States and that it can address two major challenges investors are likely to face in the near future: increases in the amounts required to invest to come to the United States in the current popular EB5 investor immigration program and the backlog that Chinese investors in particular currently face under that program. An interesting additional comment is that something similar to this program can also be employed to immigrate to Canada.